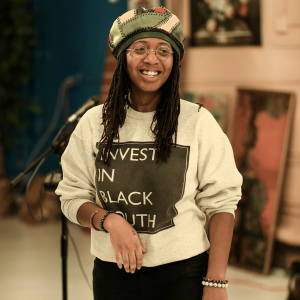 Born in Harvey, IL, Rica G. lived between Dolton, IL and Chicago’s south side with her family throughout most of her childhood. After receiving her Bachelor’s of Science in History, Technology, & Society in May 2015, her steadfast commitment to providing leadership and opportunities to school aged children in Atlanta led her to facilitate workshops for Usher’s New Look Foundation, the SAYS Youth Summit at UC Davis, and for Atlanta CARES Mentors where she also worked as a summer educator. While serving on boards for both WeCycle, Inc. and Soul Food Cypher, in 2015 she penned Commentary on the Human Experience. Currently teaches technology at the Kindezi School Old Fourth Ward (Kindezi O4W), where she helped the students create the Kindezi Tech Technology Student Association (TSA) chapter and enrolled 40 new TSA Members at Kindezi O4W. As public recognition of her work Rica G. received the Innovation in Teaching Award 2018 granted by the Governor’s Office of Student Achievement and she was named Teacher of the Year 2018 and Person of the Year 2018 by the Omega Mentoring Program Atlanta Chapter. She applied for and received a Governor’s Innovation and Teaching Award for 2017-18, a monetary award, of which a portion of the funds she used to invest in the materials for students and prepare them to compete in TSA competitions. A new chapter in Rica’s professional journey unfolds this year when she enrolls in the Department of Computing at the University of the West Indies to pursue her Postgraduate Diploma in Information Technology. She plans on providing educational consulting & academic mentoring services to young scholars while in Kingston, Jamaica to honor the memory of her late aunt who was a career educator.