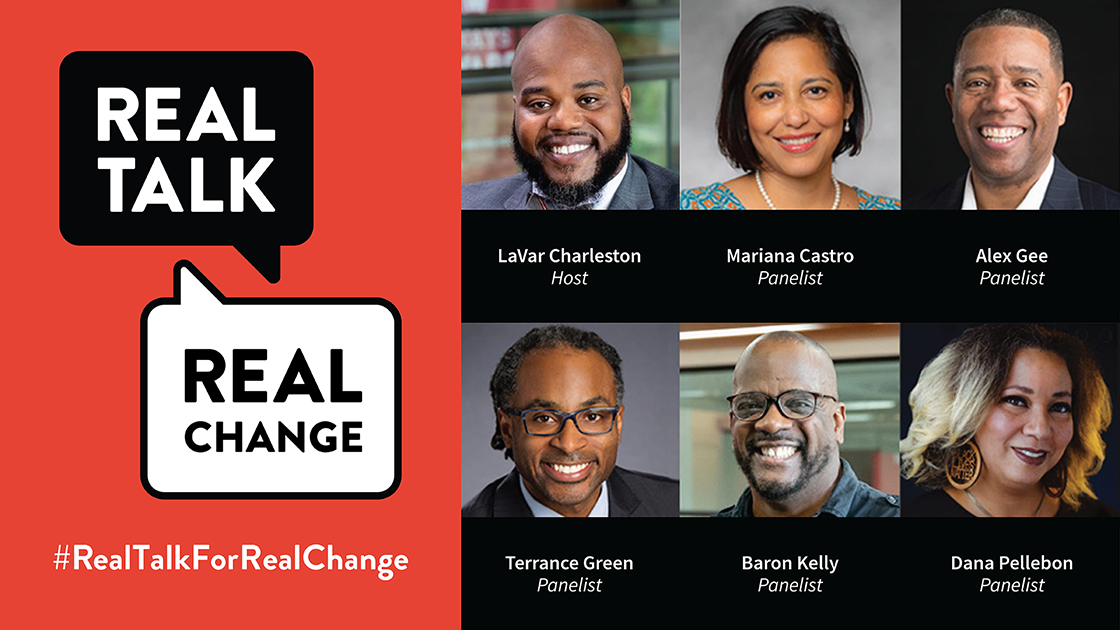 For generations, scholars, civil rights leaders, ministers, activists, and educators have pushed, fought, and even died for simply daring to communicate the need for equity and inclusion. Today, more than ever, it is necessary to have real conversations that illuminate the ills in our society that perpetuate systemic racism and negatively impact future generations. But what does it take to engage in difficult conversations about race and equity in education? How can we transform conversations into action for lasting change?

As part of the Real Talk for Real Change Symposia Series, PLACE, in partnership with the Office of Equity, Diversity, and Inclusion (OEDI), hosted an online conversation entitled “The Power of Real Talk to Make Real Change.” Featuring scholars and community leaders of color, the conversation focused on the need for honest conversations about race and equity in education that must occur before transformational change in K-12 schools can happen.

Panelists for “The Power of Real Talk to Make Real Change” were:

In this post, we will synthesize the conversation to provide seven tips for educators to have tough conversations about race and equity in education.

Seven Tips for Educators to Have Tough Conversations about Race

1. Real talk can be uncomfortable—that’s the point

According to Dr. Terrance Green, before we engage in real talk, we must first ask ourselves, real talk for whom and to what ends? He said that what counts as real talk depends on the context and should come from the people within that context.

(For more on this topic, read “How does whiteness get in the way of equity work in schools?”)

Dana Pellebon said that before you speak on a topic, you should check your privilege and elevate those who are most marginalized to speak for themselves. Only with their permission should you speak for them.

For me, real talk begins with real listening. The ability to speak about topics on a real level not only takes lived experience but an ability to reach beyond your experience and listen to those who are most impacted by what you are discussing. In that listening, you hear the solutions that are the most meaningful and impactful.

Pellebon offered the example of listening to transgender people about their perspective regarding whether to have police at Madison’s Pride celebration and then advocating to remove police from the event.

“When you are part of a system that causes harm,” said Pellebon, “you have to recognize that that harm is real and take yourself out of that conversation.”

3. Center the voices of people of color

Dr. Alex Gee said that there may be times when white tears can disrupt or deter real talk. These situations call for emotional fortitude because real talk is disruptive—it’s not about preserving the status quo.

“Real talk is about not asking permission, it’s just grabbing it and saying what needs to be said,” said Gee. “Because if you have to ask permission to say it, then it’s not real talk.”

This can be especially hard when the truth hurts. When marginalized voices must constantly tell the truth to an audience that will not listen, telling the truth can be exhausting. Pellebon said that she became tired of constant real talk and decided to just do.

Green said that educators must commit to what he called radical truth telling. He elaborated:

Invoking the words of James Baldwin’s 1963, “A Talk to Teachers,” Green said that educators must be willing to go for broke in terms of divesting from whiteness, divesting from white supremacy, and paying back what Dr. Gloria Ladson-Billings calls the educational debt.

5. Real talk is a start, but it must be combined with action

On its own, real talk is insufficient to dismantle white supremacy. Green shared an example that he often tells his students.

Dr. Baron Kelly said that he is tired of surface talk and serving on committees to come up with anti-racism statements because if these things are ends unto themselves, then they stop short of meaningful action.

Instead, real talk that leads to real action, or praxis, is what happens when beliefs are put into action, lessons are learned, and those lessons further inform beliefs and future actions. Two examples offered by panelists include holding elected officials accountable and ensuring that organizational budgets reflect values and priorities.

In addition to words and actions, leaders must demonstrate commitment to the cause of organizational change. To Dr. Mariana Castro, this requires vulnerability and courage.

In a professional environment and especially in positions of leadership, people expect you to appear sure, confident, and have it all together. Yet if we truly knew the right answers, the issues we have today would have been solved long ago.

It takes time to create environments that enable vulnerability and courage. Without proper attention and care, these efforts will fall flat. For Castro, leaders who are the most effective demonstrate ideological clarity, showing where they stand and what they are willing to stand for.

7. Cultivate the next generation of leaders

For educators, cultivating the next generation of leaders refers to both staff and students, and it involves putting them in positions of leadership and setting them up for success. For Gee, this means surrounding himself with staff members who can elevate the work and take it to an even higher level. Castro said that leaders need to create and support space for people of color to congregate and have conversations together because not everyone in the organization needs the same thing.

“You lead from where you are, and then you pave the road for others,” said Castro. “You learn to lead by leading.”

Green drew a distinction between leader-led, leaderless, and leaderful organizations, emphasizing that leadership is a practice that can be shared.

I think the practice of creating space for leaderful organizations shifts power, but it also creates the space and these opportunities where people can have the opportunity to get into the pool to start to swim because a leader isn’t hoarding that, but sharing that leadership.

According to Gee, building networks and supporting spaces that prepare the next generation of leaders is an important piece of advocacy. This requires us to push past safety.

Pellebon agreed, saying, “As long as there is oppression, there is no safety. I put myself in those spaces and push to make room.”

To conclude, the panelists all agreed that real talk must lead to action. For those who have not been engaging in real talk about race and equity, they should begin with real listening. Conversations about race and equity in education can be difficult, but they are absolutely necessary as a first step toward creating the equitable schools that our young people deserve.

PLACE offers a variety of professional learning programs for equity and inclusion. Visit our website and subscribe for updates.